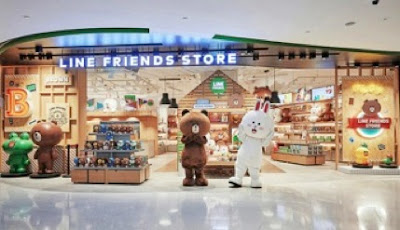 The impressive result follows the success of the store’s first phase opening, which has already sold about 30,000 LINE FRIENDS T-shirts and select products since its opening in early August (2015). LINE FRIENDS lovers in Hong Kong can now enjoy an exciting shopping experience with over 900 items, including hot new collaboration products such as LINE x Moleskin, LINE x Swarovski, LINE x be@rbrick and LINE x aiaiai. Also on sale are newly released and best-selling items, such as character coin pouches, Cony silicone iPhone cases, character umbrellas and a variety of sticker packages. 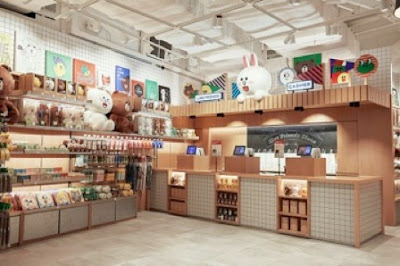 To celebrate the grand opening, limited edition Love Brown eco bags were also given out to shoppers who spent over HK$300 at the new LINE FRIENDS store.

At the same time, shoppers enjoyed more fun by participating in the “Brown©HK” campaign. Shoppers who took photos with the mega “Love Brown” figure – a symbol of eternal love sitting at the Kai Chiu Road entrance of Hysan Place – and posted it with a designated hashtag according to the rules, received a scratch card to redeem a LINE FRIENDS gift at the new store. The campaign will continue handing out scratch cards from 13:00 to 15:00 daily until 28 September 2015.

LINE FRIENDS is the brand for LINE’s original sticker characters, including Cony, Brown, Moon and James. With a number of stickers on LINE messenger, they help users to communicate with more fun. LINE FRIENDS also opens pop-up and permanent stores in different markets, selling a variety of products to extend the fun into fans’ real lives.

LNE FRIENDS stores have resonated with users and fans in 25 locations, including Korea, Japan, Hong Kong, Thailand and even the United States when it took place at Times Square, New York City in December 2014, resulting in huge turnout and support. LINE also has 11 permanent stores in Hong Kong, China, Korea, Japan and Taiwan.

Take a picture with Love Brown and:
1.     Upload the picture to LINE, Facebook or Instagram with the following hashtags #LINEFRIENDS #lovebrown #brown #hysanplace.
2.     Show the uploaded picture to a Brown©HK event promoter at the Kai Chiu Road entrance of Hysan Place.
3.     Get a scratch card from the promoter and find out what LINE FRIENDS gift you will receive (100% chance to win!)
Redeem the gift at the new LINE FRIENDS store on the 2/F of Hysan Place with your scratch card.