- Girls’ Generation broadcast “live” during V Week from 18 to 25 August
- Girls Generation reveals their life and style through V app, sharing their backstage scene, stage outfits while having interactive communication with the global fans!

V app, a real-time star broadcasting mobile application now available in both Android and iOS versions, presents the ‘Girls’ Generation V Week’ starting from 18 to 25 August. With this “App Live” program, the eight talented members of the popular K-pop girls group, Girls’ Generation will make their own broadcasts over eight days, sharing their life and style with the global fans. 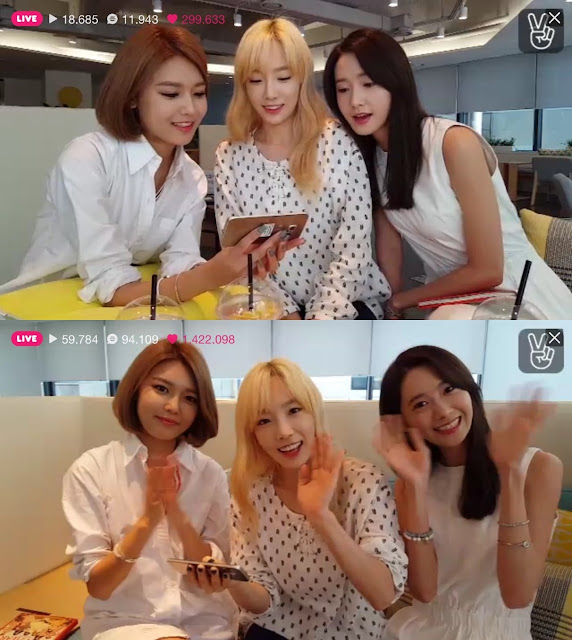 A total of eight broadcasts by Girls’ Generation are planned during ‘V Week.’ Taeyeon, Sooyoung and Yoona opened the first broadcast at 2:00 PM (Hong Kong Time) on 18 August, right after the release of the 5th official album by Girls’ Generation. During the second broadcast, which was aired at 8:00 PM the same day, all eight members – Taeyeon, Sunny, Tiffany, Hyoyeon, Yuri, Sooyoung, Yoona and Seohyun – participated and showed their dance rehearsal. During the rest of the week, fans can have a peek at the usually unseen aspects of the lives of Girls’ Generation members, such as backstage scenes and close-ups of stage outfits and enjoy interactive communication with the members. On the last day, 25 August, a ‘Special Live’ broadcast is in store for global fans, and all eight group members will participate. Users can check out a detailed schedule of Girls’ Generation’s V Week on V app.

In addition, 'Big Bang’s special broadcast program will also come to V app soon, where each member of the group will have their own individual broadcast session. Other hot K-pop stars will also be on the line-up, including SMTOWN, Infinite, Kara, GOT7 and Girls Day. Hong Kong stars and non-Korean celebrities are also expected to join the programs before long.

V app has proved its popularity all over the world, with 610,000 downloads in 170 markets on the first day of its launch. In fact, many Hong Kong K-pop lovers are already interacting with their favorite stars and watching celebrities’ daily lives through V app. The official version of V app is scheduled to be released in late August, with more features and dynamic content.

ABOUT NAVER
NAVER Corporation is Korea’s No.1 Internet company, operating the nation’s top search portal 'NAVER' (both PC and mobile). NAVER has introduced many innovative services over the years, such as ‘Comprehensive Search’, ‘Knowledge iN’ and ‘Real-time Rising Keyword'. In addition, since releasing the ‘NAVER' application, NAVER has launched applications for a wide variety of services. NAVER offers innovative mobile services for the global market, including the mobile messenger LINE through LINE Corporation, NAVER’s subsidiary. NAVER launched the Webtoon service in June 2004 in Korea and has pioneered distribution and consumption of webtoons, also known as internet cartoons. (http://www.navercorp.com/en/index.nhn).