- Special Live broadcast ‘BTS Live in Hong Kong’ to be aired at 5 pm August 29th
- Do not miss your chance to get a peek at the offstage look of BTS ahead of the concert! 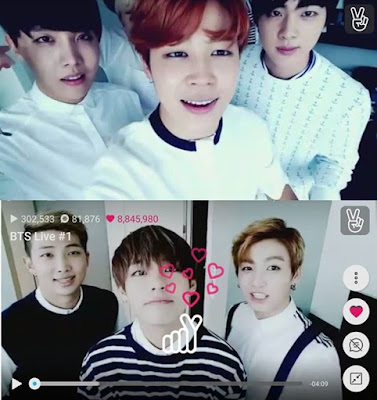 As the last stop of the world tour, ‘2015 BTS Live Trilogy Episode II: The Red Bullet,’ BTS will be having a concert at the Asia World Expo Arena in Hong Kong. Hosted by J-Hope, a member of BTS, the members’ cheerful and energetic offstage look will be shared with global fans through V app. Fans will have a chance to get a peek at how the members ease up themselves ahead of the concert.

BTS have revealed their different sides through various broadcasts on V app, including ‘RUN! B-T-S,’ ‘Attack on BTS’ and ‘1-Min English with Rap Monster.’ With more than 540,000 fans following their V app account, BTS’ live broadcasts have recorded over 9.55 million cumulative views and 76 million cumulative ‘Likes’. The group also has the highest ‘Chemi-beat,’ the relationship index between a celebrity and the fans.

ABOUT V
V is a global live-streaming video application launched by Korea’s IT service company NAVER, also the parent company of global messenger LINE. Based on its know-how and technology established through the operation of Starcast, a live-broadcasting service providing various video contents of Korean celebrities, Naver’s V offers lively videos of celebrities, uncovering different aspects that global fans have never seen before.